RV Cover Pays for Itself in One Year

One of our customers from Ontario, Canada has a 26' travel trailer that he and his wife use to tour Utah, Arizona, Nevada, Oregon and California. In the first couple of years after buying the trailer they would drive it back and forth between western US and central Canada. They soon realised that it made more sense to store their camper somewhere near where they do most of their trips. They want their trailer to last many years so they paid to store it indoors in Utah at a cost of $130/month. After a year of this they decided that this option was just too expensive given that outdoor storage is only about $35/month. At the same time they were worried that the trailer would not last as long under the elements so the started investigating trailer wrap options and found they could buy a cover/wrap for their RV for about $400. After further investigation, they found that these Made-in-China covers generally only last about two years and often leak even before this.

They asked us if Heavy Duty Tarps could make a cover that would last longer. I was quite sure we could and so we proceeded to design a cover for their specific trailer. I am a firm believer in using solid vinyl for the roof and ends of the cover so that there is no chance that a leak could cause rotting under the roof. At the same time, you do want air flow to prevent moisture from getting trapped under the cover. Temperature changes can cause condensation under the tarp and you want this to evaporate quickly so there is no time for the water to stagnate and breed mold. So we designed the cover using 90% Super Heavy Duty mesh on the sides to provide air flow and 18 oz solid vinyl on the roof and ends to provide leak-proof protection. The customer also placed pool noodles strategically under the solid vinyl to provide air flow on the roof.

Since this was the first time we had used this design we asked our customer if he would be kind enough to photograph or video his experience with the tarp. Last November he sent us this video showing how wrapped the trailer for the winter.

If you watched the video, you will see that the main drawback of this type of cover is its weight. If you are planning to install and remove the cover many times throughout the year, you are probably better off trying to find something that is lighter.  This cover weighs about 130 pounds so ideally you would have the help of a couple of strong guys to put it up and take it down. The advantage of being heavy is that the wind barely moves this cover so you don't have to worry about it flapping back and forth on windy days. The other big advantage of this cover is that it is made from heavy duty materials so, if it is taken care of, it should last 8 - 10 years. The savings over paying for covered storage during that time would be $10,000 or more.

Recently, our customer picked up the trailer after storing it for just under a year with the cover on. Here are his comments:

"The tarp worked amazingly well. It's interesting that the biggest challenge we had is that the bungee cords that we used to hold things together almost completely disintegrated. Who knows how much damage an uncovered trailer might have suffered given the fact that the weather destroyed the bungee cords.

The tarp is heavy. For future tarps, It really would be nice if the top could be made of a slightly lighter material.  The only challenge we really had, that we can learn from for the future, is to make sure we put something over top of any exposed caulking on the corners of the roof of the trailer, this is because the tarp stuck to the caulking.  This would be easily fixed by elevating the tarp using pool noodles wherever there is caulking." 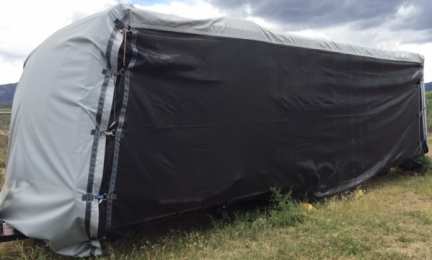 Here is a shot of the cover after the first 11 months of use in Utah.